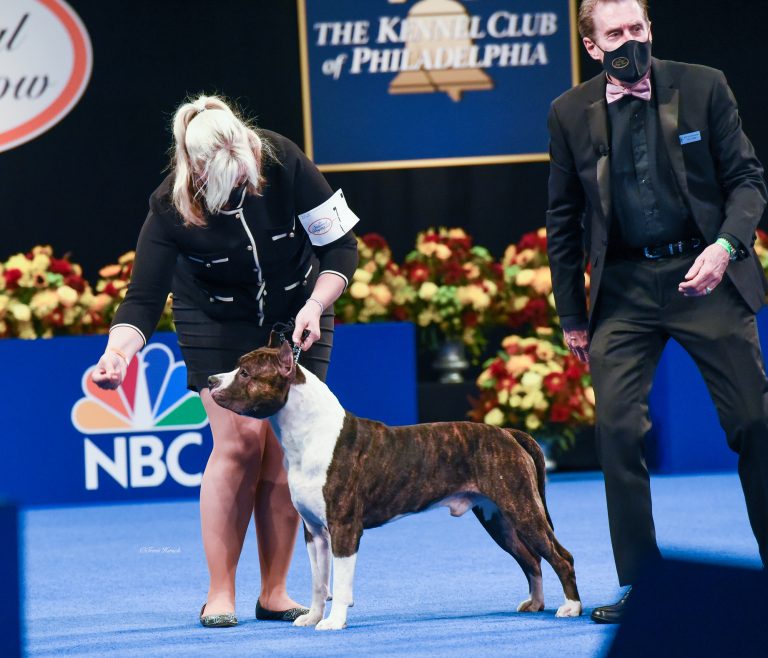 The American Staffordshire terrier, sometimes called the “AmStaff” or also known as the “American Pitbull Terrier” is a medium-large dog with a muscular build and square head. Though known for its courage and high energy level, the American Staffordshire also has an affectionate and loyal disposition. Contrary to its tough appearance, the Stafford is a gentle dog breed. The AmStaff is quite powerful and tends to be stoic in the face of pain. Commonly called a pit bull, its history can be traced back to 1800s England, where it was used in dog fighting .The American Staffordshire terrier breed was truly developed in America and was first recognized as the American Pitbull terrier by the United Kennel Club in 1889, then was recognized 30 years later by the AKC as the American Staffordshire Terrier. The breed club wanted the moniker of the American Bull Terrier which more accurately describes this breed but the already established English Bull Terrier club wouldn’t allow it, thus the breed was forced into the name of the American Staffordshire Terrier, thus the main difference is breed registry. The dogs have a rich history including bull and bear baiting as well as dog fighting when it was once a gentleman’s sport. The dogs were also used as hunting dogs and all purpose farm dogs and in recent years has evolved into an all purpose utility dog in recent decades and has even graced the stage of world championship protection sports in 2017 the AST and the APBT is one of our heart breeds and a true speciality. Almost all of our ASTs and APBT’s are produced in house and a product of over 20 years of love and dedication spent collecting and showing dogs from the top 1% of the breed to produce our lines. In 2017 Otto became the first person ever to take an AST/APBT type dog to a world championship for any FCI recognized protectection sport in the world. Otto and his dog Cappuccino made history and drew large crowds and were featured in the principal newspaper of Bilbao Spain. Kristi and Scrappy became the second ever AST team to achieve a MondioRing title as well as Otto’s dog Reno was the second ever registered APBT in the world to achieve a MondioRing 1. Both Kristi and Otto went on to compete on America’s Top Dog a hit A&E tv show with Scrappy and Wolverine, a great son of Reno. They have produced many champions of proven health, tested working titled stock and are one of the most competitive AST and APBT kennels in The world when you select an AST or APBT they have produced you are simply getting the best in the world.

Check this link out for more info about our previous work with the American Staffordshire Terrier.